Traders were using excessive leverage to go long. Funding rates for borrowing on Binance and other exchanges were in excess of 100% annualized. This is nothing new (rates were as high or higher near the Jan 8th $42k peak, as well as the February $58k peak), but it set the stage for a leverage cascade should something trigger even a moderate sell off. As it turns out, there were 3 triggers. All of them containing substantial degrees of misinformation, but with so many traders on margin, time to get at the truth was minimal.

Trigger #1: misinterpreted insider sales of Coinbase equity ($COIN).
There was a table circulating on twitter showing how much $COIN various C-level execs at Coinbase sold. The table misinterpreted how much equity each person actually owned, presumably by looking only at fully vested shares (ie, not accounting for additional options grants and unexecuted options), and therefore concluded that executives sold the majority of their shares, which people interpreted as bearish for the industry. Frank Chaparro at The Block cleared this up, finding that execs sold a far smaller portion of their shares: 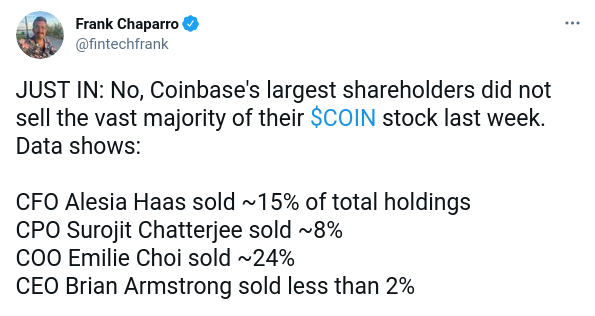 Trigger #2: questionable 'news' about the Treasury Dept charging cryptocurrency businesses.
At 10:42pm on Saturday, a twitter account with a significant following tweeted: "U.S. TREASURY TO CHARGE SEVERAL FINANCIAL INSTITUTIONS FOR MONEY LAUNDERING USING CRYPTOCURRENCIES -SOURCES", with no further information available anywhere. Apparently some traders took this as reliable news; the majority of the downward price action took place minutes after this tweet. A couple hours later, Jake Chervinsky, General Counsel at Compound Finance, noted that this 'news' did not seem credible: 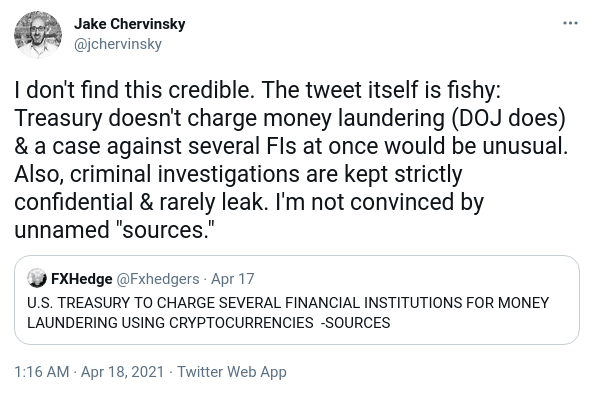 Trigger #3: Small-Sample Hashrate Data.
There have been power outages in Xinjiang Provence, China, the past few days, where a non-trivial portion of the bitcoin network's hashpower is located. Naturually, this caused a drop in hashrate, but measuring exactly how much is difficult due to the fact that bitcoin mining is a statistical process; thus hashrate data & charts are necessarily estimates. Data from CoinMetrics.io shows that these estimates fell from a high of 198 Exahash/s on April 15th, to 106 Exahash/s on Saturday (April 17th), a roughly 46% drop. But the estimate for yesterday (April 18th) has rebounded to 145 Exahash/s. It's reasonable to expect a significant change in hashrate due to the power outage (& we see significant variation when miners move equipment in China just due to seasonality), but it's unreasonable to assess these numbers on a 24hr basis due to the inherant statistical variance. Smoothed data over a week or so are far more representative. Nic Carter summed it up best: