In an interview with Bloomberg published today, Dawn Fitzpatrick, CIO of Soros Fund Management (AUM: $5.295B), both made the case for bitcoin, as well at hinted as owning some (either personally, or for the fund):


When asked directly "Do you own any bitcoin?", she paused for several seconds, laughed, and answered: "I'm not gonna answer that." 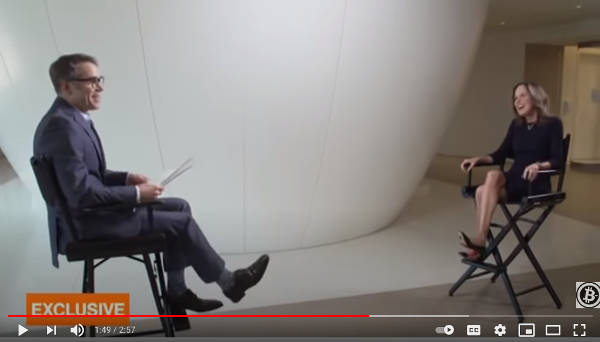 Here's a transcript of the above segment:

[Fitzpatrick] When it comes to crypto generally, we're at a really important moment in time, in that, something like bitcoin might've stayed a fringe asset, but for the fact, over the last 12 months, we've increased money supply in the US by over 25%. So there's a real fear of debasing of fiat currencies. And when you think about bitcoin, I don't think it's a currency, I think it's a commodity, but it's a commodity that's easily store-able, it's easily transferable, the IRS classifies it as a physical asset, it has a finite amount of supply, and that supply halves every 4 years. So I think it's interesting. And I think by the way, when you look at gold price action, in the context of a fairly robust inflation narrative of late, it's struggled getting traction and I think that's because bitcoin is taking some of its buyer base away. [Bloomberg]: Do you own any bitcoin? [Fitzpatrick] {pause} {laughs} I'm not gonna answer that. [Bloomberg] That is what I would call a mysterious response. [Fitzpatrick] But I will say, the one thing also, when you think about bitcoin... Central bank digital currencies are going to be here, I think quicker than people expect. China's been running their trial for a while now, and I think there are some strategic reasons why they're going to be a first mover. And I do think, from a geo-political perspective, they want that digital currency to be used around the world and it is a potential threat to bitcoin and other cryptocurrencies. [Bloomberg] I was just going to say, does that legitimize bitcoin, or does that delegitimize bitcoin? [Fitzpatrick] So I think it is a real threat, but I think it will be temporary. I don't think they'll be successful in permanently destabilizing bitcoin.