At 4:02 EDT today bitcoin's 630,000th block was mined, marking a once-every-four-years reduction of the rate at which new coins are issued on bitcoin's blockchain. That rate now works out to 1.85% annualized, which is below both the Federal Reserve's 2% inflation rate target, and most importantly for the up and coming "digital gold", below gold's estimated newly mined annual supply. 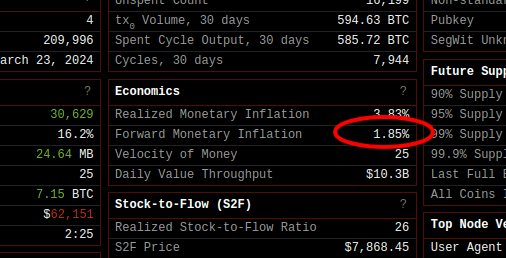 Bitcoin's halving is no surprise, as it's been built into the codebase since bitcoin launched in 2009. It is the 3rd halving event in a series of 33 hard-coded halving events which take place automatically, and without human deliberation, through the year 2136. This makes bitcoin the only money system which will credibly and predictably reduce its supply over time.