Square Crypto and ARK Invest released a report last week evaluating the potential for bitcoin mining to spur deployment of solar and other renewables across the global energy grid. The analysis suggests that bitcoin mining can have a substantial net-positive environmental impact: 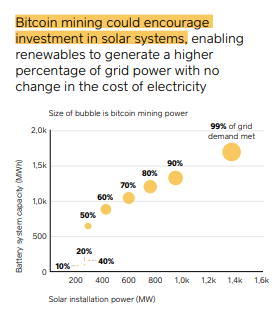 The key observation is that solar and wind are intermittent power sources, and therefore more difficult to profitably deploy at utility scale, since energy generation must always be matched with energy demand at that moment. But bitcoin mining can act as an 'energy buyer of last resort', allowing utilities to 'over build' solar and wind, and simply channel that energy into bitcoin mining when the rest of the grid is not demanding it. See the report for further detail.